John Andrews was born in Birmingham, in the industrial heartland of England — and was always keen to seek adventure. At the age of 16 this meant hitchhiking to Morocco, doubtless a risky summer escapade for a boy still at Birmingham's elite King Edward's School. 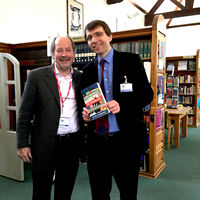 Perhaps it was that early exposure to exotic Tangier and Marrakesh that inspired Andrews to abandon Latin and ancient Greek and to study Arabic at Cambridge University. What is certain is that Arabic was the gateway first to a life beyond the confines of Britain and later to a life in journalism.

But journalism was not on the immediate horizon. Equipped in 1969 with a postgraduate certificate in education from London's Institute of Education, Andrews left Britain to teach at the University of Libya in Benghazi and the American University of Beirut, Lebanon.

Andrews loved teaching — and also loved the experience of living in a new environment. He and his wife and baby son had arrived in Libya just after the coup by Colonel Qaddafi that overthrew King Idris; the students were full of hope for their future; and Andrews enjoyed moonlighting as a disc jockey on the English service of the national radio station (his programme, stocked with pop records from England, was called "Easy Ride"). But Libya could not compete with the attractions of Lebanon: at the end of the academic year the Andrews family packed everything they owned into their Fiat car, drove through North Africa, Spain and France to see their parents in England, and then drove to Marseille to sail off to a new life in Beirut.

That life began almost literally with a bang, as the Beirut air filled with gun-shots to commemorate the death of Egypt's Gamal Abdel-Nasser. Undaunted, John Andrews drove through the demonstrations — very slowly and sensibly inviting leftist gunmen to join him in the Fiat — to introduce himself to the American University of Beirut (AUB).


with Dominique Strauss-Kahn, former head of the IMF

AUB, with its magnificent campus tumbling down to the Mediterranean, was a wonderful experience. Its students came from all over the Middle East and its faculty from all over the world. The exciting backdrop was always the politics of the region, from the Arab-Israeli conflict to the strategy of OPEC.

But AUB could not compete with the lure of journalism. Friends of Andrews and his wife Hilary were foreign correspondents, living a life much more intense than a university lecturer could ever have. When Andrews asked Peter Jennings, at Hilary's birthday party, how to get into journalism, Jennings (later the star anchorman of America's ABC News) replied: "Be my sound engineer — we're going to Pakistan next week!" 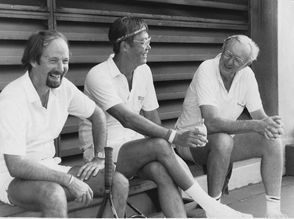 with prime minister Goh in Singapore

And so began a career in journalism. From ABC onto three years covering the Middle East as a correspondent with NBC News — including the first year of the Lebanese civil war. The quest for adventure was being satisfied with every day's filming of a conflict that was destroying the fabric, both literal and social, of Lebanon. Eventually, Hilary pointed out that John Andrews might well relish risking his life for the news but it was irresponsible given that she and their son Thomas were trapped in an apartment regularly in a sniper's sights. A humbled Andrews followed his family back to London and joined the Guardian… 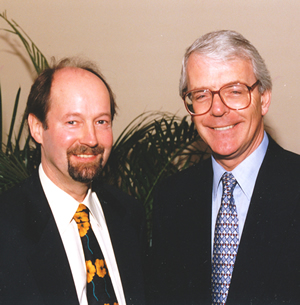 Those were the glory days of Fleet Street, and Andrews enjoyed them to the full, first as a general reporter with a special interest in North Africa, and later as the Guardian's energy correspondent. But then The Economist came calling, wooing Andrews with an offer that eventually was too good to refuse — and after six years of the Guardian's daily deadlines, The Economist's weekly deadlines seemed almost like a holiday. The extra blessing was the location of The Economist in Mayfair, surely the most elegant part of central London, in a building that overlooked both Parliament and Buckingham Palace.

For Andrews, however, the joy of journalism has very little to do with place — but everything to do with people. A journalist gets to meet and know princes and paupers, and everyone in between. The responsibility of the journalist is to "speak truth to power". The bonus, as Peter Jennings explained to John Andrews at the start of his career, is that "journalism is fun".

John Andrews and his long-suffering wife Hilary, a photographer and designer, divide their time between England and Provence, France. Their son, daughter-in-law and two grandchildren live in New York.